Posted on July 3, 2012 by musclesforcharity

June 2012 – An early 19th century brick house, (part of which was originally a stable) provided Muscles volunteers with new challenges when they were invited to help clear a family house situated in the small town of Rumst, in the Belgian Province of Antwerp. 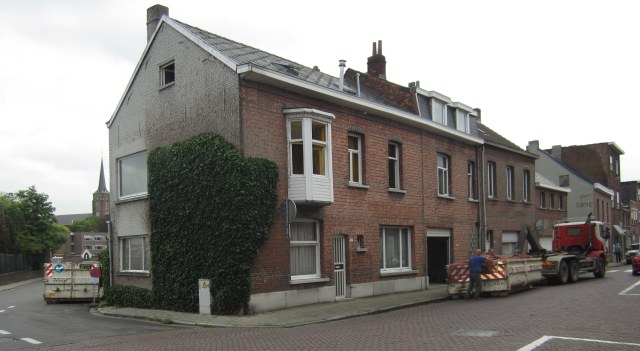 During the weekend project, eight Muscles volunteers assisted family members to clear the house (photographed above),  part of which had been used as a printing business.

The real challenges were in the very step and narrow stairways that connected the three levels, including a rambling assortment of rooms and attic areas.  Using the usual blend of ingenuity, human chains, determination, humour and ‘muscle power’ the job was completed in a day and a half.   The delighted family announced that their chosen Belgian charities were ‘Project U-turn’ and Artsen zoner Vakantie (Medics without holidays).

Dear “Muscles team”,
The family Verbruggen, owner of the house that was cleared by your team on June 29 and 30, wants to express their gratitude by donating:
–          to “Artsen zonder vakantie” (medics without vacation, www.azv.be ), a Flemish registered organization of medical staff that spend their free time going to Africa and educate local staff.
–         to “U-turn” (www.projectu-turn.com) that organizes adventurous trips for disabled people in order to have them “make a U/turn” and start a new live.
The two organizations already reacted enthusiastically.

Many thanks once more to Glenna, Ed, John, Steve, Bernie, Kevin, Johan and Robert from “Muscles for Charity” and the local volunteers Marjolijn, Jan, Dries, Ben, Chris and Hugo.
Greetings
Hugo Rens for the Verbruggen family

The efforts of the combined Belgian and UK based Muscles volunteers raised the total number of hours ‘donated’ by all team members to 9,960 hours. Well done everyone. Additional photos are featured on the Muscles -Belgium (2012) page.

This entry was posted in Uncategorized. Bookmark the permalink.