Muscles biggest project in 15 years, plus work in Sproughton, Felixstowe, Ipswich and another donation to ‘Tools with a Mission’

Sub zero temperatures and wintry weather caused a number of projects to be delayed at the beginning of 2103.

However, planning meetings and logistical preparations did not stop as the team focused on a large project on behalf of the Dame Vera Lynn Trust and children suffering from cerebral palsy.

Rotarian, and Muscles supporter, Steve Flory introduced Muscles to the staff at DVLT when he became aware of their need for assistance with a specially designed and unique garden and play area that required construction and logistical skills.

Bernie and Steve possessed those skills (and more) and steered the team through hundreds of voluntary hours as the project progressed from constructing the concrete base and wooden decking, to the precision required with framework, sides and specialist equipment for the play area, and access ramps. 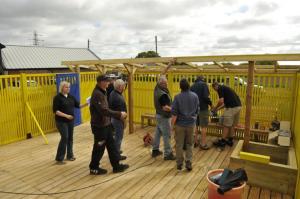 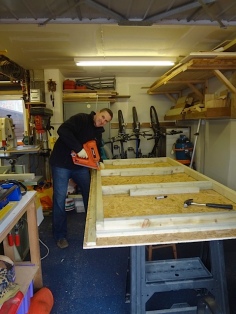 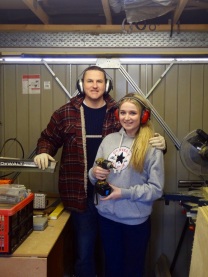 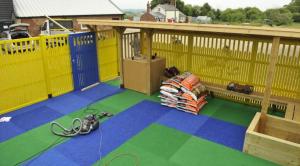 Every project needs a real ‘leader’. Barney fulfilled this role as the project came to a conclusion.

Exceptional job.  Muscles volunteers influencing (in a small, but positive way) the future for local children with cerebral palsy.

This unique and specially designed garden/play area for the children and their families is ‘interlocking’ and capable of being moved to any future location.

Muscles volunteers were represented at the official opening on Thursday 13th June 2013, by Steve and Elaine. This generated the following quote from Steve, “Its about the children and their families and helping to create something unique from other peoples vision”.

Earlier in 2013, and just down the road in Sproughton

Sub zero temperatures at the beginning of the year, severely challenged the Muscles schedule, and it was mid February before the mid week team started work on a fencing project to benefit a retired couple coping with multiple sclerosis. 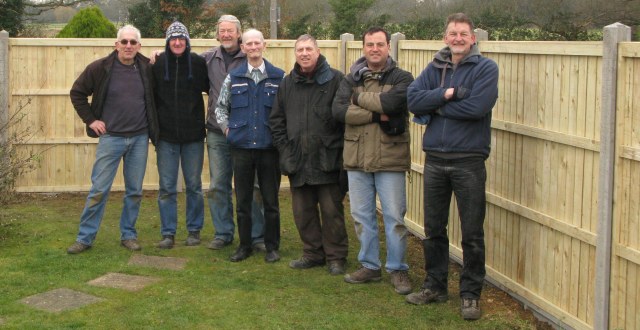 Donated and purchased tools all featured in a review and maintenance operation at ‘Shedquarters’ in July.  The review identified a range of equipment that the team will donate to TWAM.  Lady Sarah and Alan’s contribution featured beer from the Master Brewer, finance from Car Boot Sales and the official ‘Shedquarters‘ sign. Overall a very successful celebration for the volunteers and thanks to everyone involved. 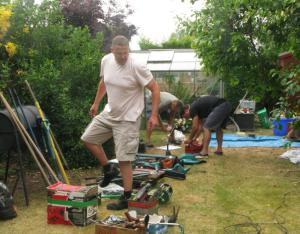 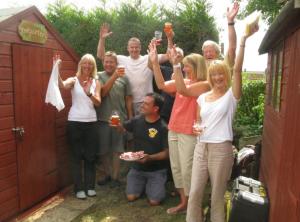 and finally as 2013 draws to a close – Bernie organizes another donation of tools to TWAM.

Detective Chief Inspector Bernie Morgan presented the tools to Martin Griffiths and Alan Cribb of TWAM on 19th November 2013.  The majority of the tools were used by criminals and have been given a new lease of life in the developing world.  In addition to those donated by Suffolk Constabulary, a significant number were donated by staff, Muscles for Charity volunteers and members of the public to help with projects in places like Uganda and Zambia.

Muscles for Charity volunteers have contributed to African projects and donations to TWAM for the last decade as a result of Bernie’s foresight and networking. After the latest donation be commented,  “The concept of this registered charity, which is based in Ipswich, is fantastic – it enables people in places like Uganda and Zambia to earn a living and to support themselves, empowering them to become self-sufficient.”