Helping Hands for the Disabled – working for the future and recognition for the Muscle commitment to the organization over several years. 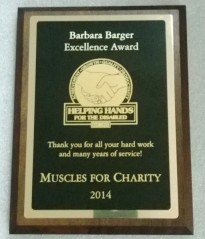 At the annual Helping Hands Auction on 17th October, the team were surprised and honored to be awarded the Barbera Berger Excellence Award for years of hard work and services to the organisation.

US volunteers, and representatives from the UK and Canada were delighted when a record breaking $3000 was raised to fund the teams 2015 projects at Trail House.

From February to March, Muscles volunteers have cleared the ground at the rear of Helping Hands for the Disabled premises in Bellevue, in preparation for the construction of a new Storage Shed.

The teams efforts were recognized in a two page article in the Helping Hands  ‘Spotlight’ magazine in May 2014.

“A huge thank you. This team is AMAZING.  I am proud to be on it, know of it, and to write about it!  Thank you to every single volunteer on the team who gives their time and dedication.   Over the course of the last two months, Muscles for Charity volunteer members have been to Trail House three times in preparation for the installation of a shed.  This shed was bought with money raised at the Live & Let Bid Auction in 2013 – thank you to those who helped raise money for this project! Phase 1 took place on February 1st.  The old cyclone fencing was removed as well as the rotten apple tree.  This was a fun day full of good fun and hard work.   Phase 2 took place on March 22nd.  This phase included removing the big roots from the dirt, leveling of the ground and installation of gravel.  We all worked hard and had a great time.  We even had two little helpers – 19 month old Morgan and 5 year old Seth.  Morgan got to ride in the wheelbarrow with Frank and Seth worked hard getting all of the dirt out of the roots.  Another great day of Muscles volunteers giving their time to Helping Hands! Phase 3 took place on March 29th.  More than half an inch of rain fell in Bellevue that day as Muscles volunteers contributed over 70 hours of labor. In addition to getting soaked, the team constructed a new storage shed, and cleaned, cleared and created new features in the grounds of Trail House.   While Cyrus, Eric and Bill were primarily responsible for constructing the new storage shed, other members of the team were busy cleaning and improving the yard area. The large and well used deck area was thoroughly washed and cleaned, which was previously installed by Muscles volunteers in 2009. This was another project supported by donations made at the Helping Hands annual auction. In addition new French drains were added to remove surface water and cinder blocks positioned to improve safety. There is one more phase to go to finish up the shed with painting and some other details – when the weather is nice and a good time is found to tackle the project.   So much more work was done than we had anticipated and we are eternally thankful to every person who helped make this happen! ”     Suzanne McCrudden

The latest part of the project has seen the emergence of a new volunteer. Meet Seth. 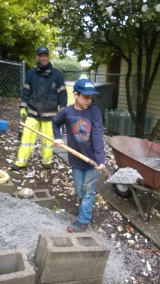 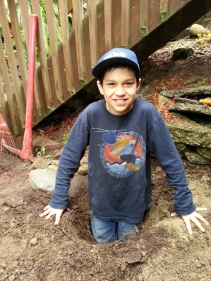 Muscles rivalry between volunteers in Seattle and Denver

NFL rivalry between Seattle Seahawks and Denver Bronco’s for the 2014 Superbowl Championship was reflected by Muscles volunteers in the Pacific Northwest and Denver.

John Marx acknowledged Seahawks superiority with a gift of booze to the Seattle team.

Here’s the evidence.  3 cases of beer, brewed in Colorado and 3 bottles of wine for the Pacific Northwest Muscles volunteers to enjoy at the next project !!    Go Hawks !!

Frank Soto created the montage(s) below after representing the US Muscles team at the annual project in Belgium during May, when 26 volunteers worked at a rural Monastery.

Muscles volunteers interviewed by Graduate Students from Seattle Pacific University.  On Friday afternoon, 21st February, Graduate Students from SPU interviewed volunteers from the Muscles USA team in relation to their studies about team dynamics, leadership and interpersonal relationships.  Ody, Glenna, Joie, Amy, Suzanne and Bish represented the Muscles team for the hour long interview which provided the students with an insight into the dynamics and ethos associated with Muscles for Charity. 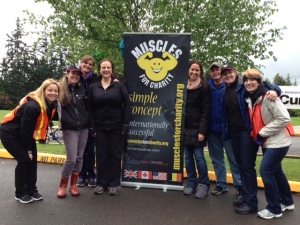 For the ninth consecutive year Muscles volunteers will be involved in the Seattle ‘Tour de Cure’ raising awareness and finance for American Diabetes Association.  The Rest Stop team are featured .This year one of the sponsors of the event on Saturday 10th May – was Seattle Mini, and the team took advantage of the opportunity to review the Routes and Rest Stations in March.

The picture features team member, Alisa who was diagnosed with Type 1 diabetes at age 8.

Congratulations to Frank Soto and Hoby Shelton who completed the 100 mile challenge (again) on 10th May, and special thanks to all the Rest Stop volunteers.